AJA IPR-10G2-HDMI provides monitoring of UltraHD and HD SMPTE 2110 signals across 10 GigE to a HDMI ouput.

It receives SMPTE ST 2110 over 10 GigE connectivity, formats the data, including UltraHD or HD video on a full-size HDMI interface. Associated audio from the video stream is extracted, synchronized, and embedded into the HDMI interface and also output on an analog RCA interface.

The IPR-10G2-HDMI also offers 1x Reference In via BNC. This makes it ideal for integrating into existing basebands environments such as master control, a truck, or an edit suite.

Monitor ST 2110 Video and Audio from anywhere on the Network.

The IPR-10G-HDMI is a SMPTE?ST?2110 to HDMI?Mini-Converter suited for point-of-use applications including source monitoring and an HDMI?feed to compatible devices.

The AJA IPR-10G-HDMI receives SMPTE?ST 2110 IP video and audio, then formats the data for output on a full size HDMI 1.4b interface.

With 3G/1.5G-SDI routers often at capacity while facilities await their transition to IP, there is a huge benefit in being able to send video sources from a feed, camera, router or edit bay?via IP and provide HDMI monitoring at the destination.

The audio associated with the video stream is extracted, synchronized, and then embedded into the HDMI interface as well as output on an analog RCA interface. 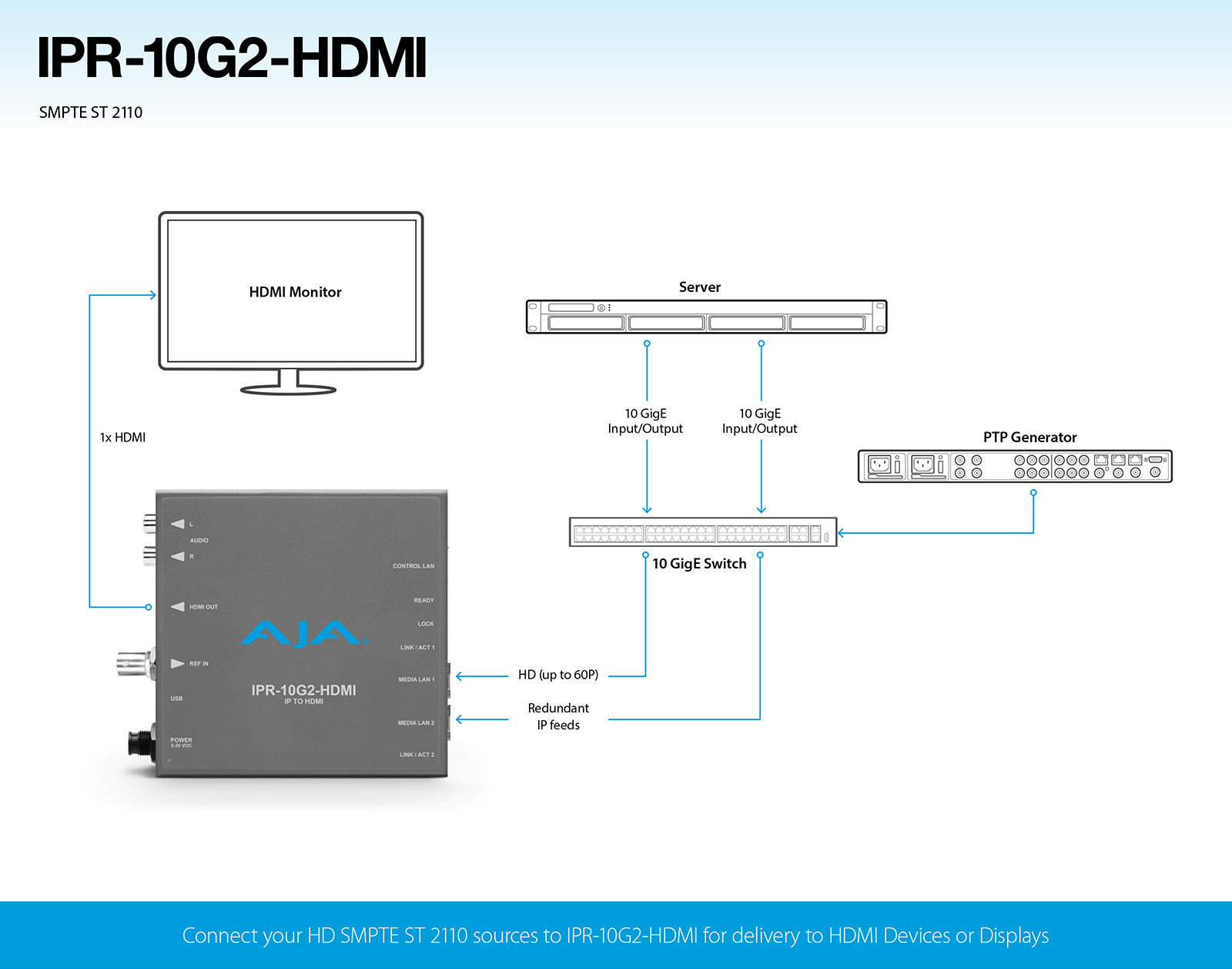 IPR-10G2-HDMI provides HDMI output from SMPTE ST 2110 video and audio over IP streams. Combine your IPR-10G2-HDMI units with AJA KONA IP for HD ?(I/O card for use in desktop workstations) or receive UltraHD?or HD from servers and more to instantly create a real-world ST 2110 workflow for video over IP production and monitoring.

New v2.3 firmware is now available for AJA’s 10 GigE IP Mini-Converter transmitters and receivers. Available as a free download, the update adds a new frame sync feature to support synchronizing unlocked sources with PTP for IPT-10G2 transmitters; new USB keyboard control for quick and easy preset recalls for IPR-10G2 and IPR-10G receivers, and support for NMOS 1.3 and LLDP for the full product lineup.

7% Goods Service Tax (GST) will be imposed over the total invoice value if purchased locally in Singapore. However if you are a tourist visiting Singapore, this GST amount can be refunded at the Changi International Airport Departure Hall GST Refund Centre before departure with goods within 60 days from the date of purchase. Please note that only Tourists who have met the Tourist Refund Scheme’s conditions and eligibility criteria can claim for the GST refund. Visit the following link for GST Guide for Visitors on Tourist Refund Scheme. https://www.iras.gov.sg/taxes/goods-services-tax-(gst)/consumers/tourist-refund-scheme