It receives SMPTE 2110 over 10 GigE connectivity, formats the data for output over 3G-SDI, and the associated audio from the video stream is extracted, synchronized, and embedded into the 3G-SDI signal and also output on an analog RCA interface.

The IPR-10G2-SDI also offers 1x Reference In via BNC. This makes it ideal for integrating into existing basebands environments such as master control, a truck, or an edit suite.

Monitor ST 2110 Video and Audio from anywhere on the Network.

The IPR-10G2-SDI is a SMPTE?ST?2110 to SDI Mini-Converter suited for point-of-use applications including source monitoring and 3G-SDI output to compatible devices. With two 3G-SDI outputs with mirrored source video, you can drive a display and connect to 3G-SDI simultaneously.

With 3G/1.5G-SDI routers often at capacity while facilities await their transition to IP, there is a huge benefit in being able to send video sources from a feed, camera, router or edit bay?via IP and provide SDI monitoring at the destination while feeding your video and audio further into a 3G-SDI chain.

The AJA IPR-10G2-SDI receives SMPTE?ST 2110 IP video and audio, then formats the data for output over 3G-SDI.

The audio associated with the video stream is extracted, synchronized, and then embedded into the SDI?interface as well as output on an analog RCA interface. 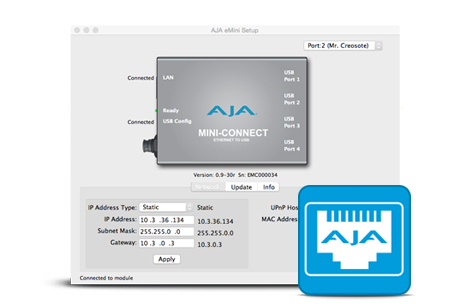 New v2.3 firmware is now available for AJA’s 10 GigE IP Mini-Converter transmitters and receivers. Available as a free download, the update adds a new frame sync feature to support synchronizing unlocked sources with PTP for IPT-10G2 transmitters; new USB keyboard control for quick and easy preset recalls for IPR-10G2 and IPR-10G receivers, and support for NMOS 1.3 and LLDP for the full product lineup.

Blackmagic Teranex Express Up and Down Converter

This model has been discontinued

This model has been discontinued