YoloBox Pro All in one Portable Multi-Camera Live Streaming Device

Note: Our Yololiv Yolobox Pro device is registered and approved by Singapore IMDA for use in Singapore
Besides being an Encoder, recorder, and Live Video switcher, Yolobox Pro can now be doubled as Video Monitor

YoloBox Pro, an improved version of Yolobox, combines the functions of a video switcher, encoder/streamer, monitor, recorder, and audio mixer. Native integration interacts with YouTube, Facebook, and Twitch directly thanks to a built-in re-streaming service, adding graphic overlays and featuring comments on the stream, Side-By-Side, Split-View, and much more.

The 8-inch YoloBox Pro weighs 750g, has 3 HDMI inputs, 1 HDMI output, and 1 full-featured USBC port. It can switch between up to 8 sources, including up to four actual local cameras. The other two pre-recorded videos, which were either downloaded from the internet or kept on an internal memory chip. The H.264 codec is supported by the Pro in streams of 540p, 720p, and 1080p60 at your choosing, as well as input resolutions of 720p and 1080i/p. You can locally show your stream on an HDMI device via HDMI output.

The YoloBox Pro features a wide LCD touchscreen interface for convenient streaming and control, displaying the streaming image as well as the input streams; the LCD display also displays the control interface, allowing you to switch information sources with a single touch. There is a separate headphone audio out as well as a line-level audio input. Using the integrated SD card port, you can easily record your stream in the.mp4 format to an optional SD card with a maximum capacity of 128 GB. You can connect the synthesizer to the line-in and the microphone to the mic-in to record music. 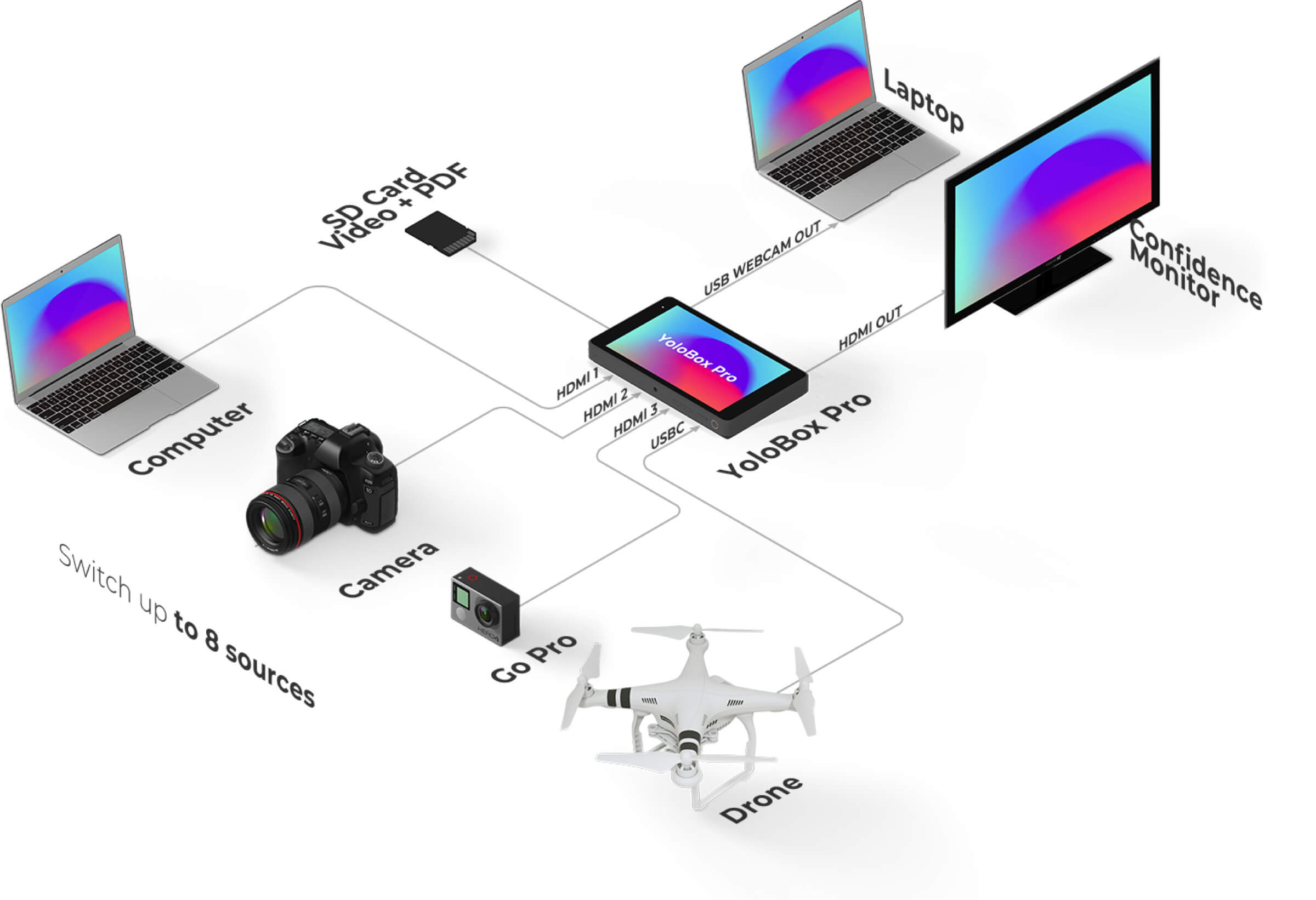 *USB Webcam Out coming soon in a future firmware update The Yololiv YoloBox Pro provides you with a large touchscreen interface for easy streaming and control.

Functions
With numerous picture-in-picture templates and graphic layers, the device functions as a switcher. It contains a built-in encoder that enables live streaming and has optional SD card recording capabilities. Simultaneous Streaming
YoloBox Pro will first push your feed to the YoloLIV platform, from where it automatically forwards your feed to a maximum of 3 destinations simultaneously. 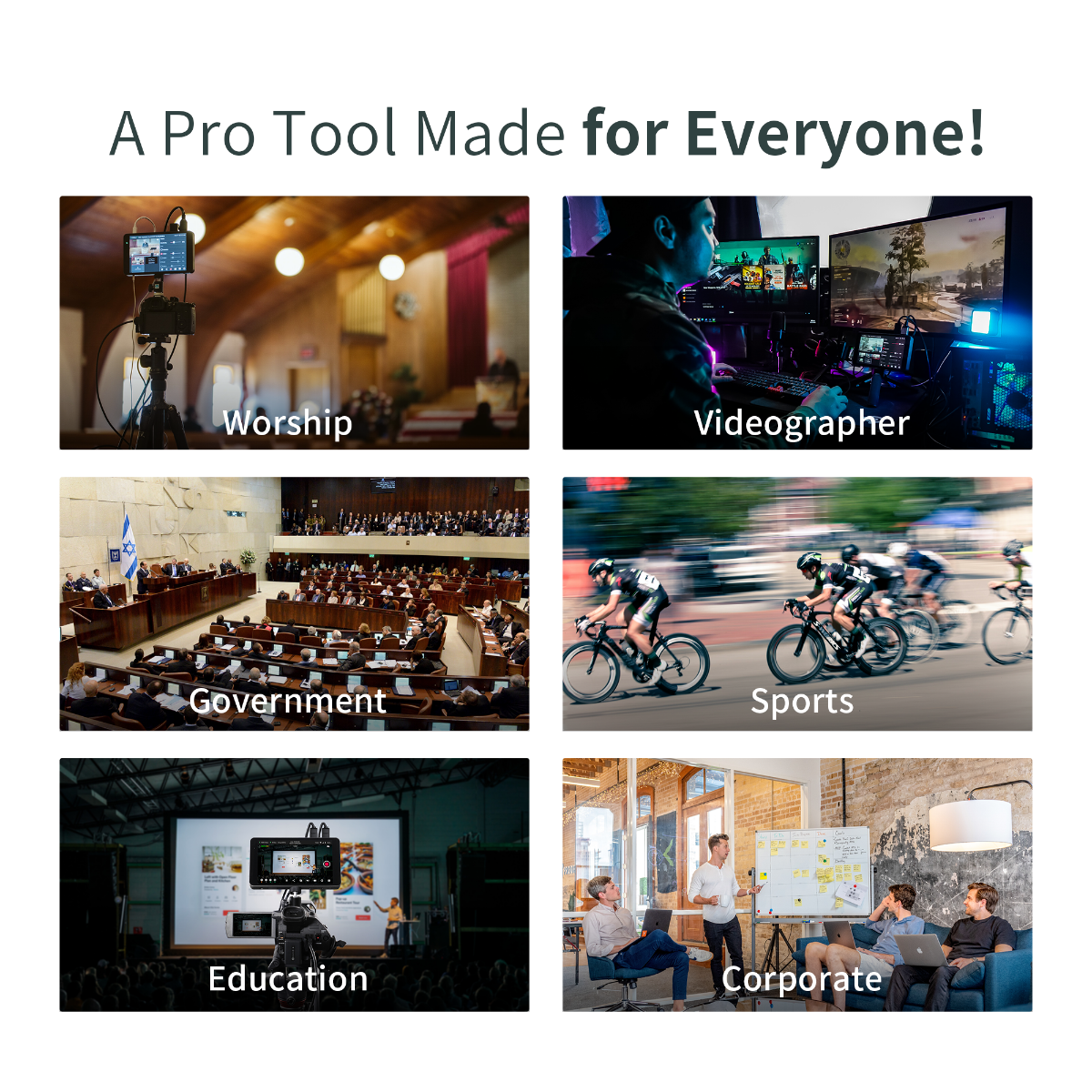 You can connect to the internet using the integrated RJ45 (Ethernet) port, Wi-Fi, and via cell service using an optional SIM card.

Battery Life
The internal battery can power your YoloBox Pro for approximately 3 hours. The YoloBox Pro charges via the USB connection, which is used for power only.

Comparison between OBS and Yolobox Pro

How to Key out green screen for YOLOBOX Pro

7% Goods Service Tax (GST) will be imposed over the total invoice value if purchased locally in Singapore. However if you are a tourist visiting Singapore, this GST amount can be refunded at the Changi International Airport Departure Hall GST Refund Centre before departure with goods within 60 days from the date of purchase. Please note that only Tourists who have met the Tourist Refund Scheme’s conditions and eligibility criteria can claim for the GST refund. Visit the following link for GST Guide for Visitors on Tourist Refund Scheme. https://www.iras.gov.sg/taxes/goods-services-tax-(gst)/consumers/tourist-refund-scheme